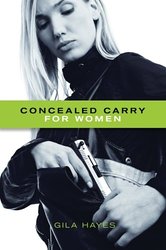 I read a lot about shooting fundamentals, proper gear selection, defensive techniques, and the psychology involved in defensive encounters. One of my favorite all-time books on these subjects is Concealed Carry For Women by Gila Hayes. Don’t be fooled by the title – this book provides a more than solid foundation for men too, as my husband will attest. Mrs. Hayes writes from experience as a martial arts student, former law enforcement officer and a well-credentialed firearms instructor. In addition, she and her husband Marty founded and operate the Armed Citizens Legal Defense Network – an organization we recommend to all of our customers and students as a way to further protect themselves. Always helpful and kind, Mrs. Hayes took some time to answer a few questions.

You have been doing this for a long time now but it seems everyone is talking about the latest trend being women and their interest in guns…. What do you think is driving this trend?

Sara, I have very mixed feelings about the data “proving” a surge in female gun ownership. I’m deeply distrustful of polling and other statistical reporting. Yes, there probably are many new female gun owners in America today, and in reality in previous generations there have been a lot of female gun owners, too, those ladies just ran a little further below the radar.

Now, here is the good news in all of this — the spike in reported female gun ownership is, in my opinion, due partly to the greater openness and, to some degree, a higher level of acceptability for an American woman to own, carry, and yes, enjoy shooting, firearms, especially handguns. One key element in that trend is women like you, modeling responsible female armed citizenship and teaching firearms safety and carry licensing classes.

While women in instructional roles really isn’t a new phenomena — long before my stint teaching at The Firearms Academy of Seattle, Inc., we all benefited from the instruction and mentoring Vicki Farnam of Defense Training International offered. On the competition side, we’ve long been inspired by female champions including Kay Clark Miculek and Lisa Munson, to name only a few examples of women who’ve been at the top of the score sheet for many, many years and are still competing, leading the way for the next generation of shooters.

What is the biggest difference in training men vs. women on the range?

Let’s be careful not to generalize too much! While many women are considerably more detail-oriented, communicate somewhat differently than men, and are generally more collaborative in their work-style, such generalizations really must not be applied to entire genders! Think instead of a ruler, for example, with 1 to 3 being at the low end, 4 to 7 the middle and 8 to 10 the high end. 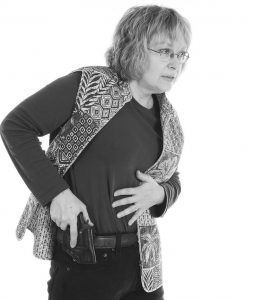 At the high end of the gender, you will find that some women want and need to receive many details and specific 1, 2, 3 step-by-step instructions *before* attempting to perform a physical skill — like lining up the sights on the center of the target and pressing the trigger smoothly. These ladies want to know the *why* as well as the how. Sometimes the gentlemen in the class or male instructors find this level of detail stifling and just want to go do the skill and learn through trial and error.

Some of those differences will certainly be present between 4 and 7, but at the low end, you need to be ready to teach ladies who are also experiential learners and gentlemen who rely heavily on gathering as much information as possible before undertaking the physical execution of the task.

This is explained much better than I ever could in the book Brain Sex: The Real Difference Between Men and Women and additionally a lot of the books written about different communication styles contain much of the same learning theory. In the end — it is all theory! We have to meet the student at the place where he or she takes in information most effectively, and that requires paying close attention to what he or she is saying and doing!

Here in southwest Florida, many of our clients are retirees. Any specific advice for those who may be losing a bit of strength or eyesight and still want to train effectively?

I believe good equipment choices become much more critical as flexibility/mobility and strength diminishes, especially in hands and arms. A few months ago I interviewed Michael Seeklander (check out that interview in the May online journal for Network members) and I asked him about physical ability issues. He told the story of training a lady with arthritis in her hands who’d been sold a small, subcompact pistol with a manual safety, which she simply could not click to the “fire” position after drawing the gun. It was a great illustration of why proper equipment is so important. How much better if that lady’s first gun had been, for example, a Glock 19 or a S&W M&P. Here’s another place that you, as an experienced instructor, can provide introductory training that includes a gun selection element (Editor’s note: check out our How To Choose A Gun private lesson), so when the new gun owner plunks down his or her money at the gun counter, they walk away with a gun on which they can really learn to shoot well! 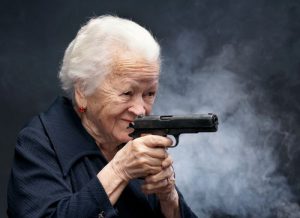 Yes, as you cite, visual acuity usually diminishes with age, and while it annoys us older shooters, so long as we can see well enough to identify the threat, and get a reasonable focus on the front sight lined up with the notch of the rear sight, you’ll find that you can shoot surprisingly well without a sharp-edged sight picture. As my spouse, who ruined his perfect eye sight in law school has quipped, “Just line up the blurry front sight in the fuzzy rear sight, and CONTROL THE TRIGGER!” Along the same lines, smart folks who rely on prescription glasses have long been doing yearly practice — either shooting a qualification test or shooting a match — without their glasses, just to stay current on what needs to be done if their glasses are knocked off in a fight. The point is, if you have trigger control, can see well enough to positively identify the target and safe backstop beyond, you can shoot combat-accurate groups. Consider the article Massad Ayoob posted and see the final sentence in his fourth bullet point of lessons learned.

We tell our students to plan for the aftermath of a defensive encounter as part of their overall personal defense plan. What sets ACLDN apart from other similarly pitched offerings from groups like the USCCA and the NRA?

The Network has developed a suite of membership benefits tailored specifically to let us best aid in the protection of a member’s legal rights after use of force in self defense. Unlike insurance programs, the Network’s membership benefits are extended at the time of the need — not as reimbursements. For example, after self defense, the Network assistance begins when we pay a deposit against attorney fees to make sure the member has an attorney’s representation as quickly as possible after self defense,and that that attorne 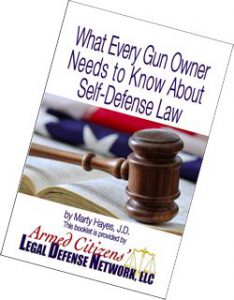 y can attend all police questioning with the member, assuring that the attorney has sufficient funding to get a private investigator out on the scene, keeping the media away from the member, assisting with bail arrangements (we have an up-to-$25,000 bail assistance benefit), and other needs as arise in the days immediately following the self-defense incident. Then, if charges are filed or civil litigation ensues, the member and his or her attorney bring the facts of the case to us, and we provide additional funding for the attorney or attorneys and the rest of the team needed to go into court and defend the member’s self-defense actions. This is all paid by the Network as the need arises, the member does not have to come up with the money up front in hopes of getting a “not guilty” verdict so he or she can file for an insurance reimbursement.

In addition, although you didn’t mention it, there is another competitor model — prepaid legalplans, but there the client is assigned an attorney. At the Network, we believe it is of critical importance that the member participate in attorney selection. That lawyer is the person who is going to be driving your defense, speaking on your behalf, holding your future in his or her hands. Wouldn’t you like to have a say in attorney selection? We think it’s that important! Network Members always choose their own attorney. There is quite a bit more in way of answer to your question on our Network website.

As a woman who has been in this field, what advice can you give an instructor like me who is trying to make a career of it?

Don’t put all the eggs in one basket! For example, I believe you have Athena’s Armory of which your work as an instructor is but one facet and not the whole income stream. Smart planning! This is comparable to all the writers who sling hash, wait tables, or walk a mail delivery route to keep food on the table, but write because they are compelled by internal motivation to tell a story, teach a lesson or preserve knowledge for future generations. Likewise, effective firearms instructors need to have first and foremost passion and commitment to teaching people how to handle firearms safely and use guns to preserve innocent life. Fulfilling that need — and it *is* a tremendous need — is not necessarily the path to fame and riches. It is, however, tremendously satisfying, and puts you in a position to do a world of good for many, many people.