Concealed Carry in the Classroom – Florida 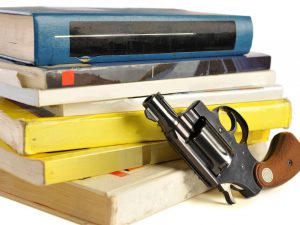 In Florida, two bills have been introduced in the state legislature that would allow superintendents to designate a person or persons to conceal and carry a weapon or firearm in district schools. House Bill 19 and Senate Bill 180, named “School Safety,” are currently being reviewed by relevant committees.

These bills would give school superintendents the option to appoint a “designee” to carry a weapon or firearm on school property. The designee must have previous law enforcement or military background and the firearm must be concealed. Additionally, the designee must be approved by the school board in each case, pass state and federal background checks and attend training provided by the Florida Department of Law Enforcement.

HB 19 has received favorable referrals from both the K-12 Subcommittee and the Appropriations Committee and is awaiting consideration by the Judiciary Committee. SB 180 has been referred out of the Criminal Justice Committee and will next be considered in the Education Pre-K-12 Committee.

Supporters of this type of solution argue that the only thing that can stop a bad guy with a gun is a good guy with a gun on the scene at the time of the incident. A well-trained local police force does very little to prevent these incidents, as even a quick response allows plenty of time for shooters to do their evil work.

Those against concealed carry in schools argue that this type of protection is the job of fully trained law enforcement or that money would be better spent on programs that help identify mental health problems before they arise.

In our estimation, gun-free zones offer an easy target for criminals. Just the fact that teachers “could be” armed would likely act as a deterrent in many situations. Recent active shooter incidents, like the movie theater in Aurora, Colorado, show that the shooter selected a location marked as “gun-free”.