As with any traditional sport, the placement of your body parts in relation to each other – your stance – determines balance and ultimately your success in the endeavor. Shooting is no different and, generally speaking, there are three major types of standing shooting stances taught in defensive handgun courses today: Isosceles, Weaver and Chapman. Which one works the best for you?

Of course, the answer to that question depends on many things such as your body type, personal preference, and situation. There are infinite variations on each of the stances mentioned above and more than likely you will develop something that combines elements of each that work for you. It is important that you understand the basic elements of body position as they relate to shooting and then practice, practice, practice. Try each of the positions and find what allows you to get the most consistent hits on target. Let’s be honest, when your life depends on it, you probably won’t have time to adjust into a perfect Isosceles anyway.

This stance is named for the shape your arms and torso make when shooting – an isosceles triangle. Your arms extend outward evenly with elbows locked. Your feet are perfectly squared to the target and you stand nearly erect without much bend in the knees. This is a common stance at static shooting ranges. 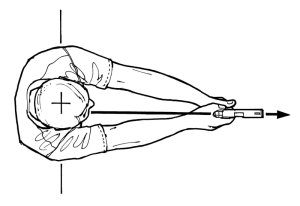 The arms and hands squeeze evenly from both sides and provide good skeletal-based stability and recoil control while standing at the firing line. A more modern version of the isosceles is to move your dominant side foot back a half step or so and bend your knees for better balance. This type of stance gives you better balance for moving if needed.

Cons – Squared off body presents the largest possible target to attacker(s), reduced stability/mobility front to back when feet are even

The Weaver stance is named for Deputy Jack Weaver, a competitive shooter and contemporary of the legendary Jeff Cooper, who soon adopted this technique for his now-famous shooting school, Gunsite, in Arizona. The 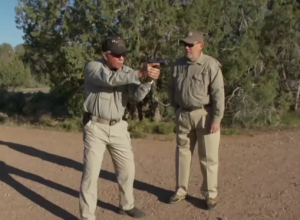 Weaver stance is a more bladed stance than the isosceles, with the dominant side foot a full step behind. The elbows are both bent straight down (not sticking out) and the hands use a push-pull method to control recoil. The dominant hand pushes straight out against the grip and the weak hand pulls straight back. This muscular (rather than skeletal) control of recoil may require more practice and strength to master. 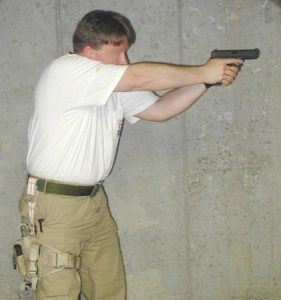 The Chapman stance is named for competitive shooter Ray Chapman. This stance is similar to the Weaver and is sometimes called a Modified Weaver stance. The firing hand arm is kept completely straight, some would say like a rifle stock, and the shooter looks down the arm at the sights. The weak hand arm is bent at the elbow as in the Weaver. The feet are bladed and the knees are bent.

Cons – Same as weaver, uncomfortable to shoot this style for long periods.

The bottom line: Your body type, personal preferences, situation and shooting goals will all help dictate which stance you use at any given moment. The most important part is to be aware of what your body is doing while shooting and note how small changes the placement of your feet, shoulders, arms and hands can improve or reduce your ability to acquire sights, control recoil, and ultimately, put rounds on your target.

We are a small, family-owned business located on the Southwest Florida coast. We are currently experiencing Hurricane Ian and may not get back with you right away. We anticipate losing power and will promptly return any questions as soon as we are back in the office. Thank you for understanding and stay safe!