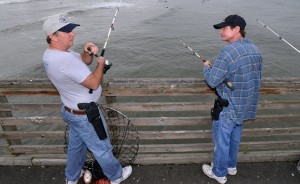 Imagine this scenario for a moment…
You are out on the fishing pier for a nice afternoon spent “drowning worms” and enjoying the peace and quiet. As usual, you legally open carry your firearm while fishing and to protect yourself from wildlife and other potential threats. It is a nice Floridian benefit to have your firearm close at hand while you are intensely focused on the saltwater task at hand with your back turned to the world. As you start to slowly reel up for a bait check, you sense something is wrong. Suddenly, someone grabs for your legally holstered firearm from behind you without warning! You reach for your backup gun as you turn to see…a uniformed police officer!

This is exactly what happened to Florida resident and Florida Carry member George Freeman at the public pier at Ballast Point on Tampa Bay during a routine fishing trip in mid-June. While open carry is generally not allowed in the State of Florida, an exemption is made for open carry while target shooting, hunting, or fishing. Thus, Mr. Freeman was withing his rights to open carry a firearm on the pier.

Upon turning and seeing the officer, Mr. Freeman did not draw his backup gun and presented a valid Concealed Carry Permit. He did not resist the seizure of his firearms and he was detained for over an hour and asked to leave the pier. Officers threatened him with a trespassing violation if he returned.

Thankfully, Mr. Freeman knew his rights but did not overreact to or threaten the under-trained officer or the situation could have escalated quickly. The Tampa Police Department has since issued a statement saying the incident was a mistake on the officers’ part and the trespass warning will be rescinded. The non-profit group Florida Carry has filed a lawsuit against the Tampa Police Department to help insure that uncalled-for incidents such as this cease permanently.

Bottom line: It is essential that citizens and law enforcement KNOW YOUR RIGHTS! In the event of confusion or uncertainty, a civil conversation (as opposed to sneaking up behind someone…or drawing a gun) goes a long way toward mitigating any unpredictable escalation of force.

If you would like to donate to the GoFundMe campaign for this legal action, you can do so HERE.

Also, please check out Florida Carry – a non-profit, non-partisan, grassroots organization dedicated to advancing the fundamental civil right of all Floridians to keep and bear arms for self defense as guaranteed by the Second Amendment to the United States Constitution and Article I Section 8 of the Florida Constitution.