As taught in the NRA Basic Pistol course, the five fundamentals of pistol shooting are aiming, breath control, hold control, trigger control and follow-through. But, before you begin to learn how to properly shoot a pistol, you need to determine your dominant hand and eye. Of course, maybe you already know this, but it never hurts to do a quick check. Generally speaking, whichever hand you use to throw a fastball (or put on lipstick) is your dominant hand. Easy, right? If you don’t already know your dominant eye, that’s easy too. Hold your hands out in front of you at arm’s length and make a small triangle shaped opening with the back of your hands and outstretched thumbs. Line up a target within this triangle and then bring your hands back close to the face. The opening will be directly in front of your dominant eye. It will feel unnatural to bring your triangle into the non-dominant eye. If it doesn’t, you may not have one dominant eye and you should just choose the eye on your dominant hand side.

There is one more aspect of technique to consider before discussing the fundamentals of shooting – grip. Proper grip is important for controlling and aiming the firearm and must be practiced, especially for new shooters. A two-handed grip is recommended for most situations. The backstrap of the gun should be snugged firmly into the web area between the thumb and index finger of the dominant hand. The support hand wraps around the front of the grip and firing hand fingers. Be sure to not “tea cup” the firearm and allow the support hand to drop underneath the grip. Both hands work in a push and pull fashion to maintain stability and reduce the effects of recoil. 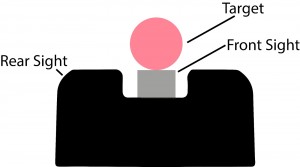 Aiming
Proper aiming technique involves two elements: sight alignment and sight picture. Sight alignment is the relationship of your dominant eye, rear sight and front sight post. Ideally, the front post should be centered left to right with the top of the post even with the top of the rear sight. Sight picture is the relationship of those elements, as a group, to the chosen target. In target shooting, just think of a lollipop and – make the center of the target sit on top of the properly aligned sights like a lollipop sits on its stem.

Breath Control
As in any athletic endeavor, keeping one’s breathing rate under control is critical for success. While target shooting, try to breathe normally even if nervousness has made you a bit jumpy. When you are ready to fire, simply hold the exhale for a second or two and take the shot. Resume the exhale after the shot and continue with normal breathing. Holding your breath completely is one way to remain steady while taking a shot under extreme conditions. However, holding your breath for too long can give you the “shakes”.

Hold Control
Hold control describes the attempt to keep all of the various elements involved in a stable shooting position motionless during a firing sequence. Resist the urge to reposition your grip or shuffle your feet around between shots, unless you notice improper technique.

Trigger Control
A proper and consistent trigger press is critical to accurate shooting. The goal is to press the trigger without affecting the sight alignment or sight picture. The trigger should touch the middle of the last (under the nail) pad of the index finger. Apply steady pressure until the trigger “breaks” and a shot is fired. The break should be a surprise. Anticipating the break, noise, recoil, etc… will likely cause flinching and affect accuracy.

Follow-Through
All of the previously mentioned fundamentals should be applied for a brief moment after a shot is fired. This provides consistency, good muscle memory and a stable platform from which to fire successive shots. Also, it ensures that the shooter is not developing bad habits that will creep into the firing sequence and affect accuracy over time.

In addition to these fundamentals, much can be said about different firing positions. There are many variations but, generally speaking, a firing position should be balanced, supported, consistent and comfortable.